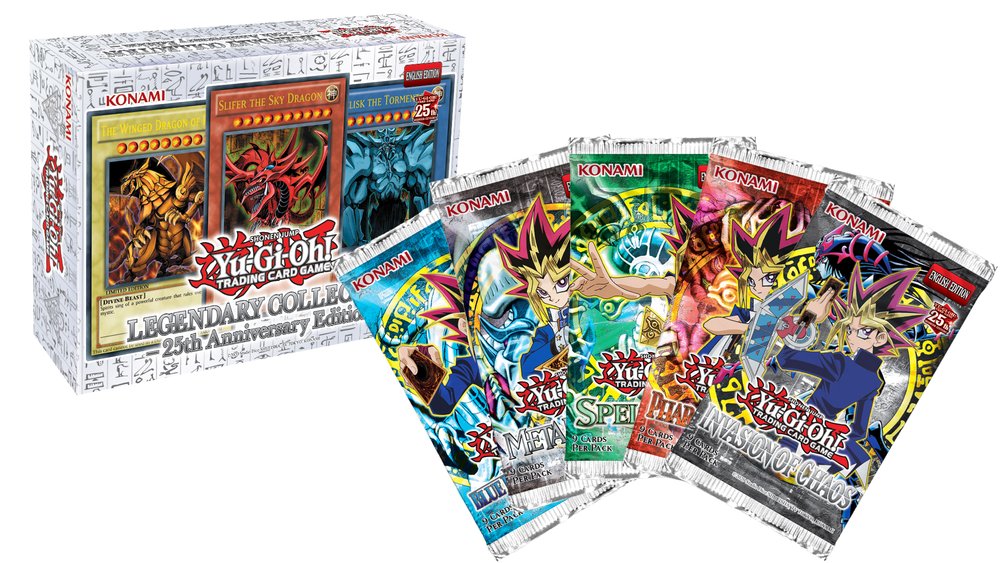 The Yu-Gi-Oh! Trading Card Game is about to celebrate its 25th anniversary and they have some fun things planned. First, Konami is bringing back Legendary collection! Renamed Legendary Collection: 25th Anniversary Edition, this box comes with 6 booster packs and 6 Ultra Rare cards like when it was first released, but there is a new surprise: a seventh card! The seventh card will be a second copy of one of the other promotional cards included, but in a brand new 25th anniversary rarity called The Quarter Century Secret Rare. That’s quite the name. The 6 packs inside will be one each Legend of Blue-Eyes White Dragon, Metal Raiders, Spelled ruler, Pharaoh’s servant, Dark crisisand Invasion of Chaos. The 6 promotional cards are Obelisk the Tormentor, Slifer the Sky Dragon, The Winged Dragon of Ra, Blue-Eyes White Dragon, Dark Magician and Red-Eyes Black Dragon. It appears that the Egyptian God cards will be promotional versions since that is what was released with the original Legendary collection, but I could be wrong. You can buy Legendary Collection: 25th Anniversary Edition starting April 21 for $31.99. 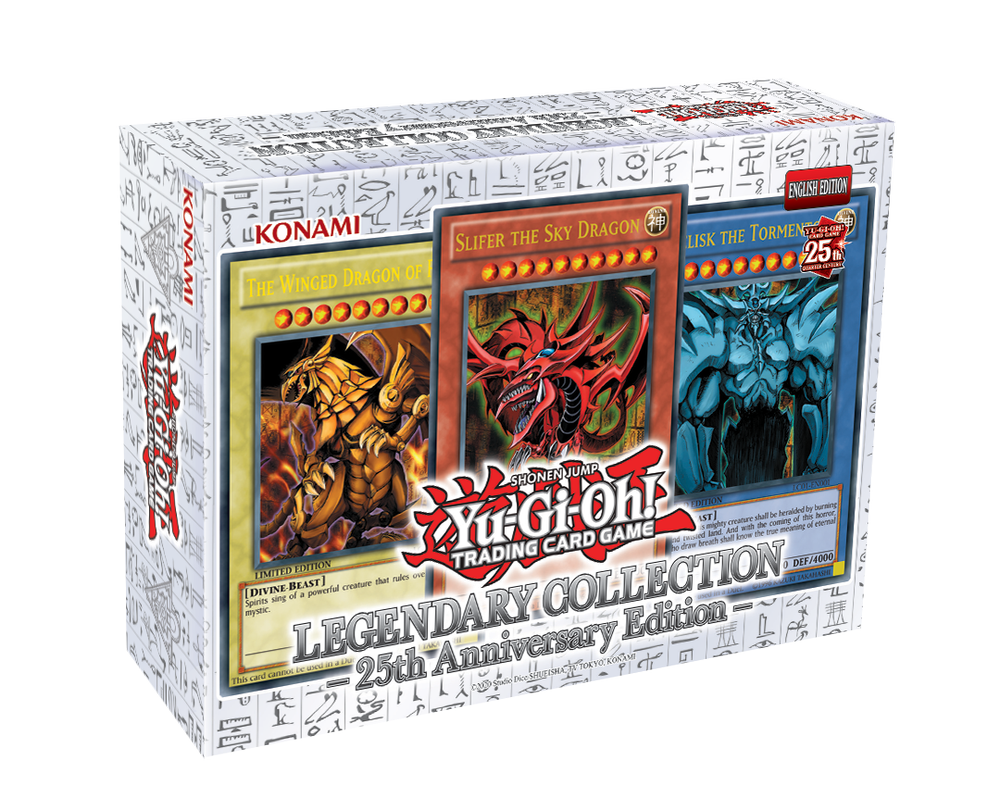 The very first Yu-Gi-Oh! TRADING CARD GAME Legendary Collection is reborn as Legendary Collection: 25th Anniversary Edition! It contains 6 booster packs and 6 ultra cards, including special variant cards of some of the most famous monsters from the original anime series.

In addition to the 6 Ultra Rare cards, which include the highly requested and coveted original Egyptian God Card promotions, the 25th Anniversary Edition will include a bonus 7th card! This 7th card will give duelists a sneak peek at a brand new rarity created just for the 25th anniversary: ​​The Quarter Century Secret Rare

But wait, there’s more! In July, Konami will re-release five of the booster packs from the Legendary Collection as stand-alone boosters! Starting July 14th, Duelists will be able to purchase 25th Anniversary Editions of Legend of Blue-Eyes White Dragon, Metal Raiders, Spelled ruler, Pharaoh’s servantand Invasion of Chaos. I wonder why Dark crisis was negated. Also, where is Labyrinth of Nightmare? Each pack will cost $4.49 and includes 9 cards in their original rarities. Many Yugitubers like Alex Cimo and Team APS (among several others) have really popularized visiting old packs and looking for treasures. Additionally, last year Konami announced some alternative formats that these packs could really help promote. If only Konami would do more to directly support these alternative formats, we might be on to something. 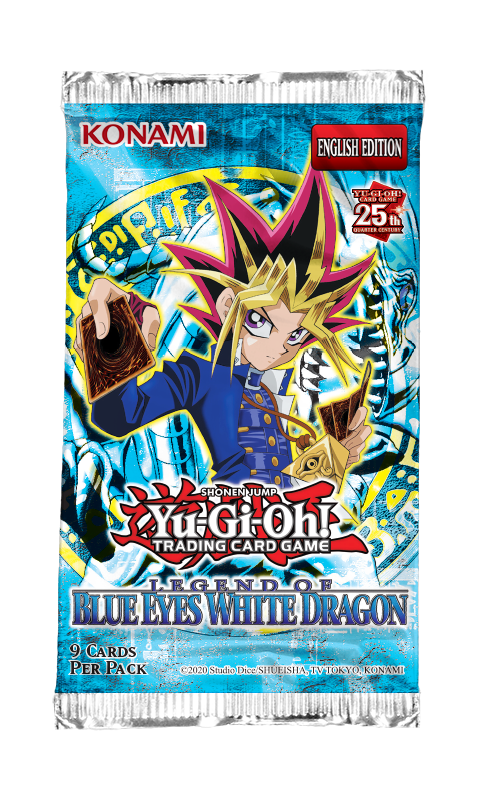 Legend of Blue-Eyes White Dragon was known not only for being the first booster set, but also for introducing famous cards like Exodia the Forbidden One, as well as incredible Spell Cards like Pot of Greed and Raigeki. This print will contain both Secret Rares from the set. 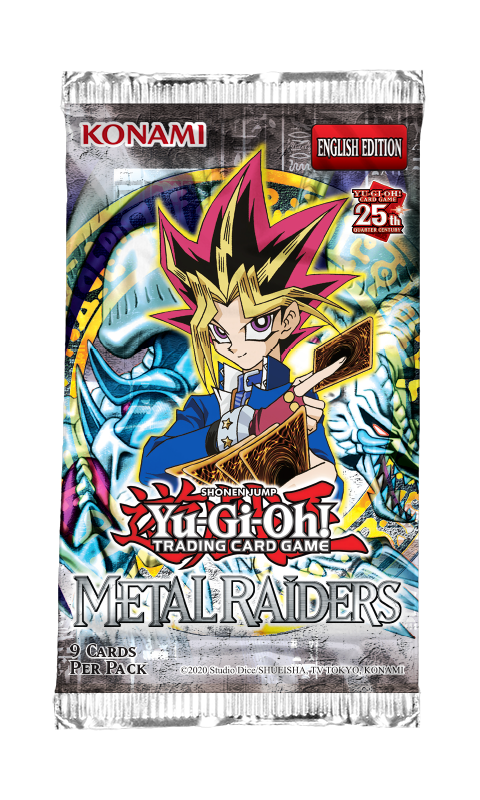 This set is known for introducing many incredibly powerful trap cards, including Yugi’s Mirror Force and the first wave of Counter Trap cards: Horn of Heaven, Magic Jammer, Seven Tools of the Bandit, and you can’t forget Solemn Judgment! Of course, Metal Raiders didn’t leave duelists defenseless against these powerful cards – Heavy Storm also debuted in this set! This print will contain both Secret Rares from the set. 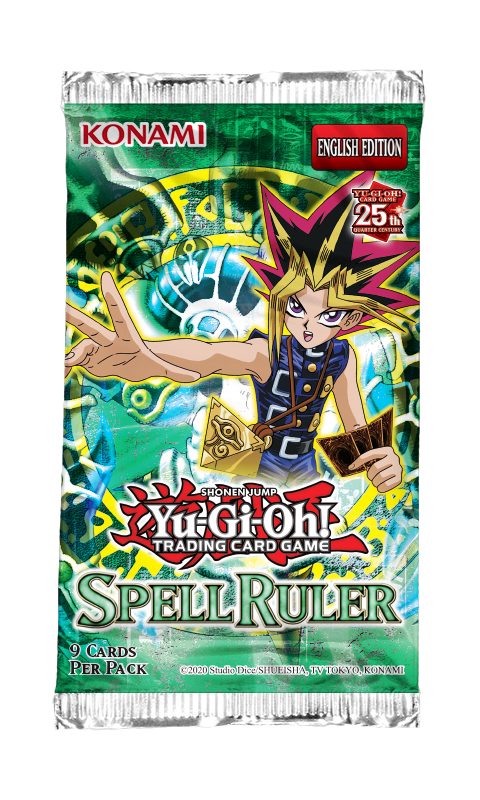 Spell Ruler was the first appearance of Ritual Spell Cards, Ritual Monsters, and Quick-Play Spell Cards such as Mystical Space Typhoon. This was the first appearance of Pegasus’ Toon World and Toon monsters from the first Yu-Gi-Oh! animated series, including the beloved Blue-Eyes Toon Dragon! With them were powerful spell cards such as Delinquent Duo, Snatch Steal and Painful Choice. This print will contain both Secret Rares from the set. 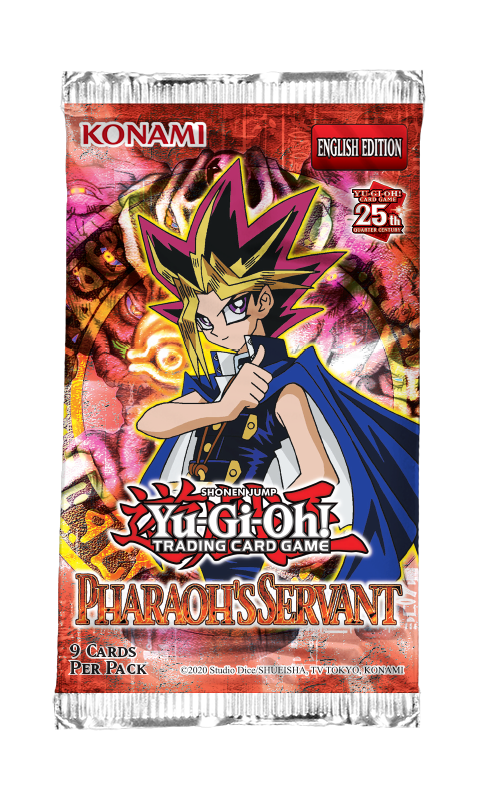 Pharaoh’s Servant was the debut of Pegasus’ ultimate monster, Thousand-Eyes Restrict, and it also introduced era-defining cards like Jinzo and Imperial Order to the game. Servant of the Pharaoh made it easier than ever to revive your monsters with Premature Burial and Call of the Haunted or burn away your opponent’s life points with Truce. This print will contain both Secret Rares from the set. 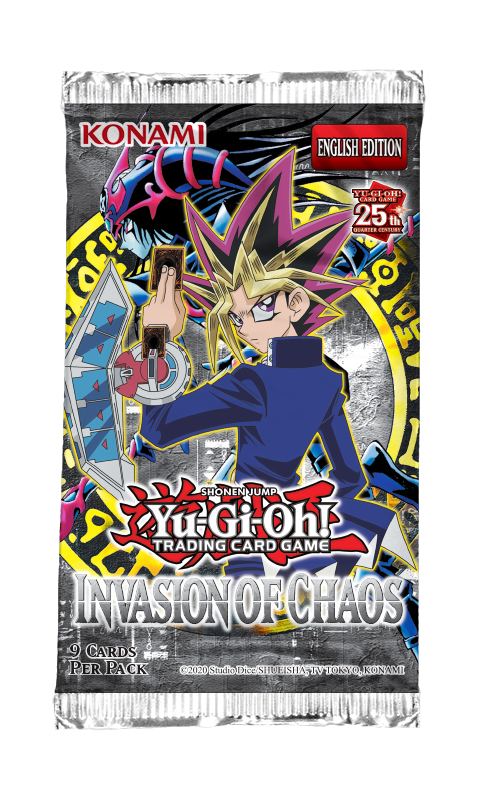 Invasion of Chaos unleashed a series of powerful cards that rewarded Duelists who filled their decks with LIGHT and DARK Attribute monsters. The legendary Black Luster Soldier – Envoy of the Beginning and Chaos Emperor Dragon – Envoy of the End dominated duels and the spell fetching Dark Magician of Chaos joined them thanks to the incredibly powerful Dimension Fusion Spell Card! This print will contain both Secret Rares from the set.

Which of these reissues are you most excited for for the 25th anniversary? Yu-Gi-Oh!? What are some other things you hope Konami will do for the occasion?

All the most scandalous Kardashian scandals of 2022

The buy now pay later bubble is about to burst

Pedro Pascal on working simultaneously on THE LAST OF US and THE MANDALORIAN, calling it “The Best Double-dipping I Could Possibly Imagine” — GeekTyrant