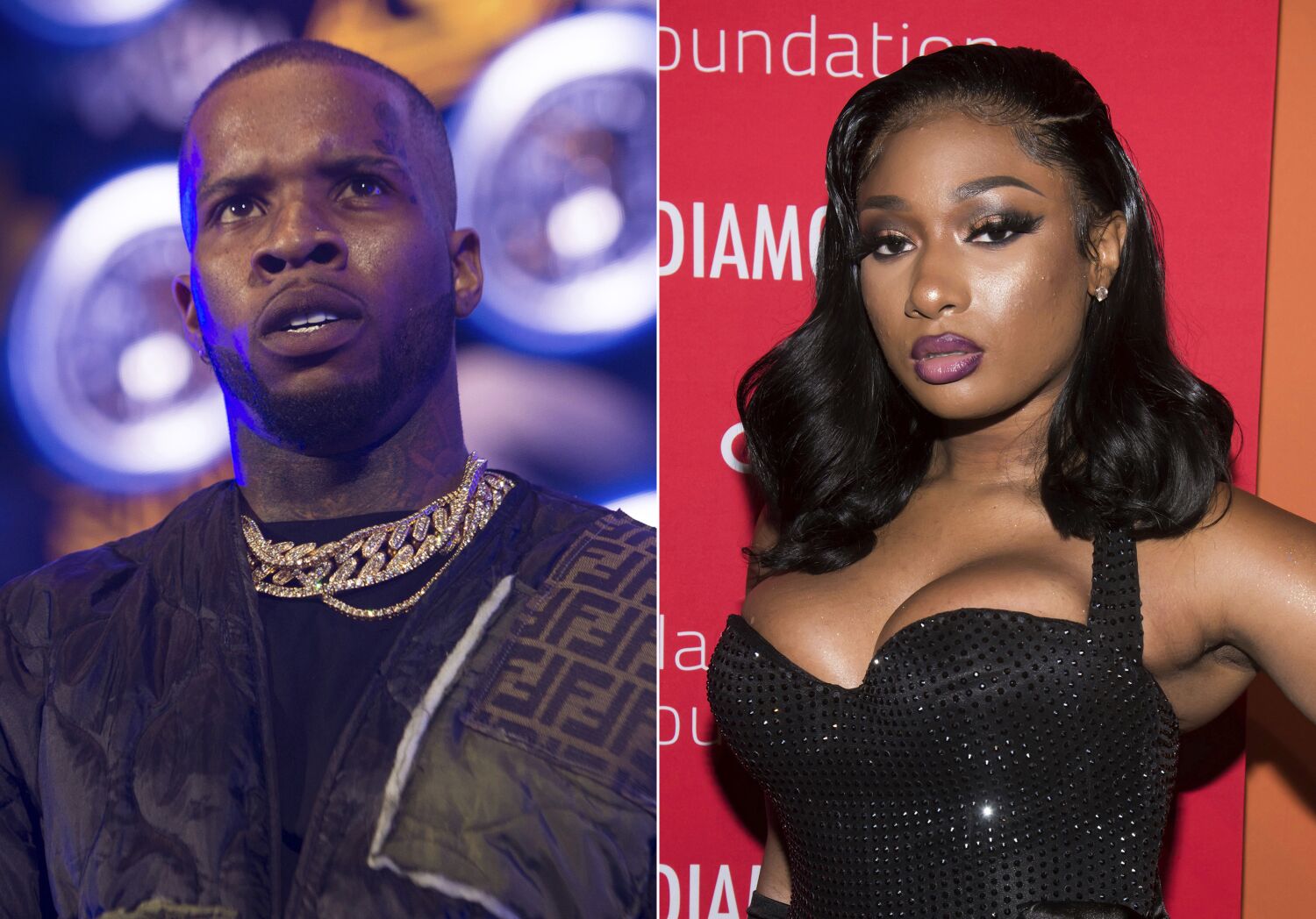 Daystar Peterson, a Canadian rapper who goes by the name Tory Lanez, was convicted of assault and weapons offenses on Friday for shooting rap star Megan Thee Stallion after an alcohol-fueled party in 2020.

Peterson faces more than 20 years in prison for the shots jurors concluded he fired at the feet of Stallion, whose real name is Megan Pete, in a fit of rage.

The case came to highlight the misogyny in the male-dominated hip-hop industry, which Pete reversed with blistering songs that often depict women exercising power over men. She endured a barrage of criticism for reporting Peterson to the police.

The jury reached its decision on its first full day of deliberations after a two-week trial.

Pete took the stand last week, testifying that Peterson shot her after the pair left a party at the Hollywood Hills home of Kylie Jenner, a member of the Kardashian clan, and started fighting.

The argument began, Pete said, when she, her friend Kelsey Harris and Peterson were being driven in Peterson’s SUV, and he revealed to Harris that the two rappers had become romantically involved. Harris had previously been involved with Peterson and became angry, Pete said.

Pete told jurors she demanded to be let out of the vehicle on Nichols Canyon Road. As she walked away, she claimed, Peterson yelled, “Dance, b—!” before firing a volley of shots at her, although no other witnesses said they heard Peterson yell. Pete was hit several times in the feet and had to undergo surgery to remove bullet fragments.

“The jury got it right,” said Alex Spiro, Pete’s attorney. “I am thankful that there is justice for Me.”

George Mgdesyan, Peterson’s attorney, was not immediately available for comment.

In addition to Pete, Peterson and Harris, Peterson’s bodyguard Jaquan Smith was in the SUV when the shootout broke out. Smith did not testify, leaving Harris as the witness who had the best view of the incident. But prosecutors have heard two very different stories from Harris, Pete’s former confidante who fell out with the hitmaker after the shooting.

In court last week, Harris refused to testify until she was granted immunity by prosecutors. On the stand, she deflected questions and asked to invoke her 5th Amendment right against self-incrimination.

Harris repeatedly chalked up his hazy memory to a night of heavy drinking at Jenner’s party, and would not say who shot Pete or answer questions about allegations that Peterson offered both women $1 million not to report the incident to police — although she sent a text message the night of the argument that read: “Tory shot Meg.”

The day after Harris took the stand, Los Angeles County Superior Court Judge David Herriford allowed prosecutors to play the entirety of a recorded interview Harris gave them in September. On the tape, she clearly identifies Peterson as the gunman and gives a play-by-play account of the night of the shooting, telling the story with minimal prompting from prosecutors.

“You start hearing gunshots. … I might look up on the second or third shot. … You see Tory … he’s leaning over, the door’s open,” Harris said on the tape. “He’s shooting over the top of the door, right front passenger side.”

As the verdict was read, Peterson, dressed in a white turtleneck and powder pink suit, sat slumped in his chair with his chin up, expressionless.

After Herriford set sentencing for Jan. 27 and ended the proceedings, Peterson’s supporters sat silent and solemn in the courtroom.

The silence was broken when Peterson’s father stood up from the seat directly behind his son and shouted, “This evil system!” He pointed at the prosecutors and shouted, “You are evil! You know exactly what you did!”

Sheriff’s deputies escorted Peterson’s father and stepmother from the courtroom as they both shouted, “Adultery!”

Peterson’s toddler stood nearby, visibly shaken by the commotion.

“We love you,” exclaimed one woman who was in tears. “God has you,” cried a man.

Deputies handcuffed Peterson and led him away.

Peterson has repeatedly denied any wrongdoing and pleaded not guilty to charges of assault, illegal possession of a weapon and negligent discharge of a firearm.

Mgdesyan tried to paint Harris as the shooter, claiming she snapped after learning her best friend saw Peterson. He repeatedly emphasized that a forensic analysis of the gun did not reveal Peterson’s DNA on the magazine; all tests on the firearm were inconclusive.

An LAPD criminalist testified that there was as many as four people’s DNA on both the gun and the magazine, but they could not prove that Peterson had touched the gun. Both Harris and Peterson tested positive for gunshot residue, but this can occur due to proximity to a gun being fired.

Mgdesyan has sought to attack the reliability of the police investigation, questioning why officials did not collect a DNA sample from Harris at the time of the incident. None of the police witnesses have given any answer.

On Tuesday, Mgdesyan called a witness he said could identify Harris as the shooter. But the man, a Nichols Canyon Road resident named Sean Kelly, said he “never saw a gun” that night.

During a confused hour on the stand, Kelly said he thought he “saw the girl shoot first,” but later said he saw no firearm, only muzzle flash coming from Peterson. An audio recording of the incident, played by prosecutors in court, depicted three rapid shots, a pause, then two more.

Like Harris’ testimony, there were inconsistencies between what Kelly initially told police and Mgdesyan and what he said on the stand. When he first called 911, Kelly did not mention a female shooter, according to a transcript referenced in court by Deputy Dist. Atty. Alexander Bott, although Mgdesyan later got a police investigator to acknowledge that he never asked Kelly for a description of the shooter. Kelly admitted he had previously told a defense investigator he saw Peterson wrestle a gun away from “a woman” — presumably Harris — but he was less clear on that point on the stand Tuesday.

Before sentencing, jurors paid particular attention to Kelly’s account of the shooting. On Thursday, the first day of deliberations, the jury asked the court to read back Kelly’s entire testimony.

Pete, for his part, testified about the fallout from her decision to go to the police about the shooting. Peterson released an entire album in 2020, mainly dedicated to denying Pete’s account of the shooting and declaring his innocence; a recent Drake song featured lyrics that raise similar doubts.

As Pete testified, the normally bubbly voice behind “WAP” and “Hot Girl Summer” often faltered, and she opened up about how she’s struggled with depression and suicidal thoughts in the wake of the shooting. Had she known the backlash she would receive for reporting Peterson, Pete said, she would not have come forward.

“So many of you stood with an abuser just to prove once again that black women never get the grace and protection we deserve,” author Jemele Hill tweeted.

In a statement, Los Angeles County Dist. Atty. George Gascón praised Pete, saying she “showed incredible courage and vulnerability with your testimony, despite repeated and grotesque attacks that you did not deserve.”

Drawing a line at women’s testimony in the recent Los Angeles rape trial against disgraced movie mogul Harvey Weinstein, Gascón continued: “Women, especially black women, are afraid to report crimes like assault and sexual violence because too often they are not believed. This trial, for the second time this month, highlighted the many ways our society needs to do better for women.”

Anna Kendrick blamed herself for past abusive relationships