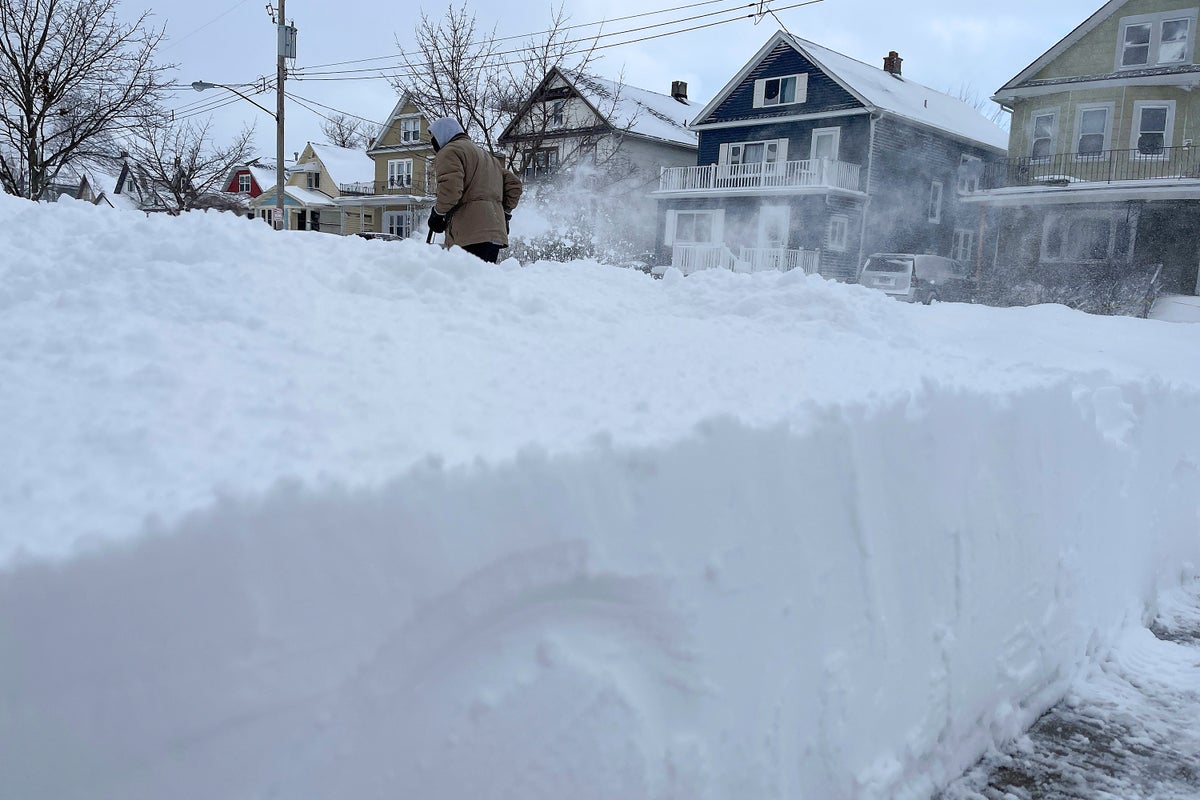 Sign up for our free US Evening Headlines email

Millions of people across the United States and Canada spent the Christmas holidays huddled against freezing conditions as Winter Storm Elliott continued to wreak havoc across much of North America. The deadly storm has left many without power and trapped inside their homes, and has disrupted thousands of flights.

Temperatures fell as low as -40C in some places, while the scale of the storm has been almost unprecedented, stretching from the Great Lakes to the Rio Grande along the Mexican border.

About 60 percent of the U.S. population was under some kind of winter weather advisory or warning on Sunday, as temperatures dropped drastically below normal from east of the Rocky Mountains to the Appalachians, the National Weather Service said.

The extreme winter storm – which has already killed at least 24 people – has disrupted air, rail and road traffic at one of the busiest times of the year.

Perhaps hardest hit was Buffalo, New York, where residents were buried in nearly 4 feet of snow and left without heat as a result of region-wide power outages.

Erie County Chief Mark Poloncarz said the death toll from the storm had risen to seven in the Buffalo region of far western New York state, where total snow accumulation was more than a foot.

Some of the dead were found in cars and some in snowbanks, Poloncarz said, adding that the death toll could still rise.

“This is not the Christmas any of us hoped for or expected, but try to have the best Christmas possible today,” he said on Twitter on Sunday. “My deepest condolences to the families who have lost their loved ones.”

New York Governor Kathy Hochul told reporters that she had been in contact with the White House and that the Biden administration would support the state’s request for a federal disaster declaration.

“This will go down in history as Buffalo’s most destructive storm. This one is, and we’re still in the middle of it,” Hochul said.

FlightAware data showed that more than 2,800 flights were canceled on December 24, and another 6,500 were delayed.

Greyhound and Amtrak also experienced service disruptions due to the storm. Greyhound canceled its bus services in certain areas on Saturday and Sunday due to “winter weather,” CNN reported.

Amtrak also reported canceling some of its train routes through Christmas, but noted that customers affected should be able to catch another train on another day without issue.

On the shipping side, UPS, FedEx and USPS have all experienced disruptions in their operations as a result of the storm. UPS compiled a list of zip codes where shipping disruptions were likely, noting that “some delivery and pickup services may be affected”.

FedEx issued a statement saying the company had experienced “significant disruption” at two of its processing hubs, noting that “all FedEx Express locations have been affected by severe weather and delays are expected for package deliveries across the United States with a delivery commitment through Monday 26 . December”.

The USPS said it had closed 89 post offices, and even shipping giant Amazon said it had been forced to “temporarily shut down” some of its websites.

University of California apologizes for ‘unethical’ experiments on prison inmates