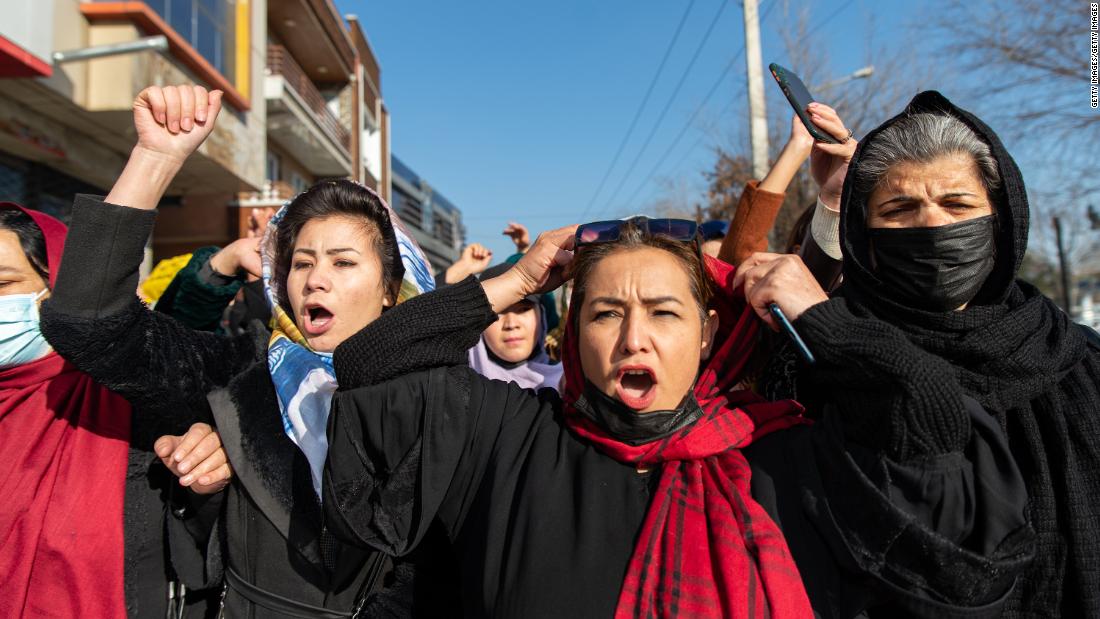 A group of women took to the streets of the Afghan city of Herat on Saturday, protesting a Taliban order this week suspending all female students from attending university in the country.

Girls could be seen running from the water cannon and chanting “cowards” at officials.

The Taliban’s announcement this week that it was suspending university education for female students was the latest step in an ongoing crackdown on Afghan women’s freedoms.

The move came despite the group promising when it returned to power last year that it would respect women’s rights.

It follows a similar move in March this year which prevented girls from returning to secondary school.

Male students at universities across the country have responded to the latest education ban by boycotting their exams in protest.

“Education is the duty of men and women,” said a statement from the Mirwais Nika Institute of Higher Education in Kandahar issued on Saturday. “It is the fundamental right and the secret behind the country’s development and self-reliance.”

Students had initially asked Taliban officials to reverse the ban, but “no positive response” was given, the school said – adding that “dissatisfaction and unhappiness” led to the boycott.

A university official told CNN that the students’ decision to boycott their entrance exams would put classes on hold.

The Taliban returned to power in Afghanistan in August 2021 in a lightning takeover following the withdrawal of US troops, having ruled the country from 1996 to 2001 – when the US-led invasion forced the group from power.

During its previous term of office, the group was notorious for its treatment of women as second-class citizens.

After taking power last year, the group made a series of promises that it would protect the rights of women and girls.

But activists say the Taliban have broken their word and are steadily cutting back women’s freedoms.

On Saturday, the group ordered all local and international non-governmental organizations (NGOs) in the country to stop female employees from attending work. Failure to comply will result in the revocation of licenses for NGOs, an official notice from the ministry read.

A spokesman told CNN the move was due to non-compliance with Islamic dress codes and other laws and regulations in the Islamic emirate.

Afghan women can no longer work in most sectors.

Their travel rights have also been severely restricted and their access to public spaces significantly reduced. Women are also required to cover themselves fully in public – including their faces.

A Buffalo woman was found dead in her car after being trapped by snow, her family says

‘Wheel of Fortune’ fans furious over Pat Sajak’s comment about daughter Maggie: ‘Nepotism at its best’