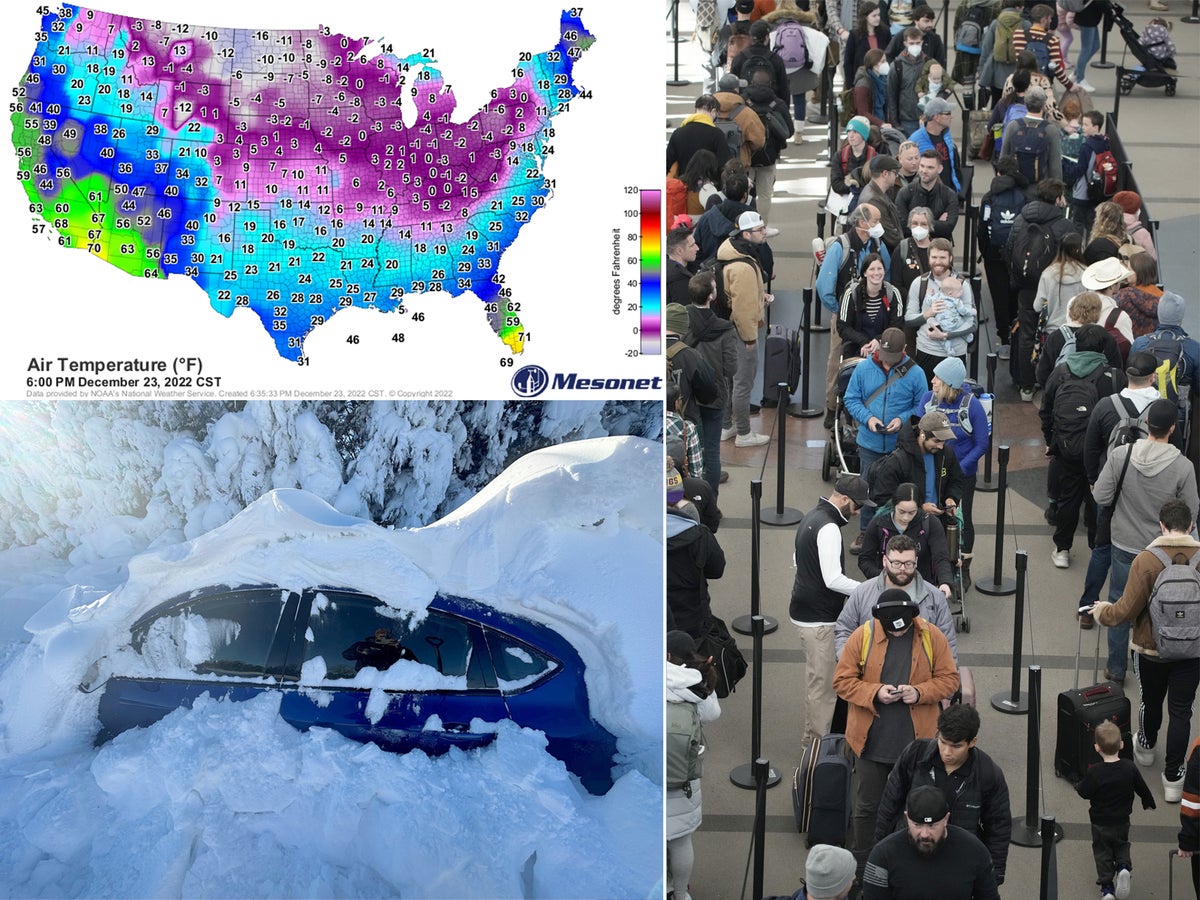 The winter storm hits the US ahead of the holidays

Get our free climate e-mail

America is facing the coldest Christmas in modern memory as at least 17 people have died in the dangerous winter storm gripping the country.

Thousands were stranded at airports on Christmas Eve and power outages rippled across regions.

Almost 800,000 customers were without power on Saturday afternoon, with the eastern states being the hardest hit.

Airline cancellations topped 5,700 U.S. flights on Friday and were followed by another 2,100 on Saturday as blizzards, whiteouts, freezing rain and freezing, high winds stretched from the Canadian border south to the Rio Grande, the Gulf Coast and central Florida, and from the Pacific Northwest to the east coast. Wind chill drives temperatures to minus 40 degrees in some parts of the western states.

New York Gov. Kathy Hochul announced Saturday that she would pursue a federal disaster declaration to streamline the process of getting additional resources to the region.

What is a “bomb cyclone”? Warning for winter weather in the United States

An Arctic blast is sweeping across the United States, affecting parts of the country this holiday season with a miserable mix of dangerously cold, blinding snow showers and frost.

The powerful winter storm will bring widespread, disruptive and potentially crippling effects across the central and eastern United States between now and Christmas Eve, the National Weather Service warned.

Forecasters are also warning of the potential for a ‘bomb cyclone’ – but what does this mean?

The weather phenomenon is technically called bombogenesis and whether it occurs depends on how quickly the pressure drops.

When the jet stream pushes very cold air down from the Arctic into the United States, this mass of freezing air bumps up against the warmer air in front of it.

And if the atmospheric pressure drops rapidly over a period of 24 hours, it can become a severe storm otherwise known as a “bomb cyclone”. They usually occur over water due to high levels of heat and humidity, so it would be a rare event for a bomb cyclone to occur over land.

Unprecedented numbers seek shelter in a region where thousands live outside

Emergency weather shelters in Portland, Oregon, called for volunteers due to high demand and staffing issues as a winter storm that brought snow, freezing rain, ice and freezing temperatures drenched the area.

An unprecedented number of people are seeking shelter in a region where thousands are living outside, and many employees have been unable to make it to their shift because of dangerous road conditions or illness, officials said.

Nearly 800 people were sleeping at the city’s five shelters Thursday night, said Julie Sullivan-Springhetti, spokeswoman for Multnomah County, which is home to Portland.

“The largest number of people I’ve ever seen have come to the shelter,” she said. – We are trying to get more support. We have the experts who are responsible, but this is to help people with meals, wheelchairs, get them to the right place.”

The shelters will remain open until Saturday.

Hell freezes over in Michigan

Hell literally froze over as the Michigan city was hit by the winter storm that has killed at least 15 people across the US so far.

Temperatures fell to -45 C in Montana on Friday and -23 C on Saturday in northern Minnesota.

The area west of Detroit, where the city of Hell is located, had temperatures around -8 C on Saturday.

The grid operator encourages consumers to save energy

The grid operator that oversees 13 states has urged consumers to conserve electricity as it issued a warning that blackouts may be necessary.

“CPJM continues to closely monitor power supply conditions. It will make every effort to keep power flowing in the region. If necessary, PJM may take additional steps, such as reducing voltage. PJM is coordinating efforts between generators, power providers and local utilities,” the company added.

Across the six New England states, nearly 400,000 electric customers remained without power Saturday morning, with some utilities warning it could be days before power is restored. In North Carolina, more than 415,000 customers were without power, according to poweroutage.us.

The system-wide emergency call from Pennsylvania-based PJM Interconnection advised residents to set thermostats lower than usual, to postpone the use of large appliances such as stoves and dishwashers and to turn off non-essential lights. Commercial and industrial power users have also been told to cut back. Utility officials said that at the same time increased demand across the electrical system came as some power plants have trouble operating in extreme cold. They warned of rolling blackouts.

“It will be short-lived, we will do everything we can to prevent it, but it is a real possibility,” said Mike Bryson, PJM’s senior vice president of operations. It covers all or part of Delaware, Illinois, Indiana, Kentucky, Maryland, Michigan, New Jersey, North Carolina, Ohio, Pennsylvania, Tennessee, Virginia, West Virginia and Washington, DC

The power demand has broken all previous records in Tennessee.

The Tennessee Valley Authority (TVA) delivered a record 740 gigawatt hours in the past 24 hours.

“We know it’s challenging to ask for power savings, especially during the holiday season, and we appreciate everyone’s help and patience,” TVA Chief Operating Officer Don Moul said in a statement. “TVA and local power companies continue to make every effort to minimize any disruption while ensuring the overall power grid remains reliable.”

Hundreds are stuck in cars in Erie County, New York

Hundreds of people are stuck in their cars in Erie County, New York as the winter storm continues.

Erie County Executive Mark Poloncarz told CNN that “it’s probably somewhere in the neighborhood of a couple of hundred now, based on the numbers we’ve seen”.

“That’s a dramatic drop from 500 or more overnight,” he added.

“There is a driving ban that applies to the whole county, and there’s a reason for that, it’s because the conditions are still so difficult that you can easily get stuck, and then you take resources off the road when you really need them.” he said.

A ferocious winter storm left nearly 2 million homes and businesses without power across the United States on Saturday, as millions more people were left to worry about how the prospect of more power outages would affect vacation and travel plans.

The blinding blizzards, freezing rain and freezing cold that enveloped much of the country knocked out power to 1.7 million homes and businesses, while major grid operators warned the 65 million people they serve across the eastern US that blackouts may be necessary .

Pennsylvania-based PJM Interconnection said power plants are having trouble operating in the freezing weather and has asked residents to refrain from unnecessary use of electricity. It issued a system-wide conservation emergency — asking residents in 13 states to set thermostats lower than usual, to postpone the use of large appliances such as stoves and dishwashers and to turn off non-essential lights. Commercial and industrial power users have also been told to cut back.

PJM officials said there is increased demand for electricity across the system, while some power plants are struggling to operate in extreme cold. They said they want people to be prepared for the possibility of rolling blackouts.

Nashville Mayor John Cooper asked the Tennessee capital’s NFL team, the Titans, to postpone their Saturday game “in solidarity with our neighbors.”

The request comes amid rolling blackouts imposed by the Tennessee Valley Authority (TVA) to limit the load on the energy grid.

Cooper said the rolling blackouts would continue and asked that all non-essential businesses limit their use of power.

“TVA needs to invest in infrastructure to withstand extreme temperatures,” he said.

PHOTOS: Snow and freezing temperatures hit the US

With Damar Hamlin’s injury, the NFL faces a reckoning