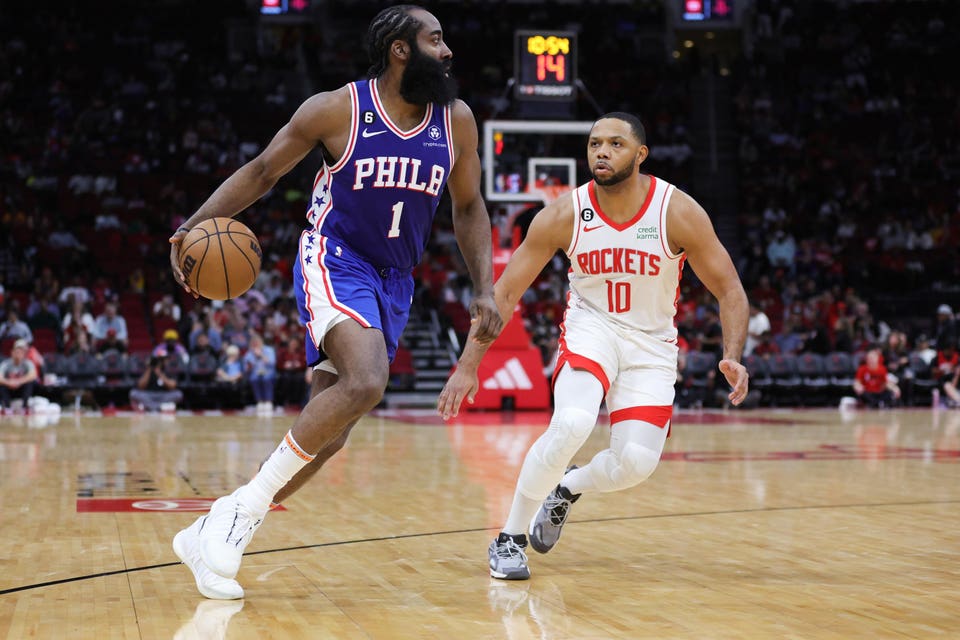 James Harden’s return to the Philadelphia 76ers next season may not be a foregone conclusion.

Ahead of the Sixers’ Christmas Day matchup against the New York Knicks, ESPN’s Adrian Wojnarowski reported that Harden was “seriously considering a return to the Houston Rockets in free agency” if he decided not to join the Sixers. “Harden and his inner circle have openly weighed in on Houston over the last few months,” Wojnarowski added.

Wojnarowski described Harden’s future with the Sixers as a “fluid proposition,” noting that the state of his partnership with All-Star center Joel Embiid and the team’s playoff run “could be determining factors in how Harden continues this season.” He described Harden’s relationship with Embiid and Sixers head coach Doc Rivers as “something closer to a work in progress,” suggesting that the next six months could prove crucial either way.

However, Wojnarowski wasn’t the only one to hint at Harden’s potential interest in a Houston reunion this week. ESPN Tim McMahon said there had already been “a lot of gossip and links, ‘Hey, if things don’t work out in Philly, keep an eye on James Harden going back to Houston,'” which he considered “certainly fair.”

None of these reports definitively conclude that Harden will leave the Sixers after this season. However, he appears to be a far greater flight risk than previously thought.

This past offseason, Harden declined a $47.4 million player option for the 2022-23 season and re-signed with the Sixers on a two-year, $68.6 million deal with a second-year player option. He effectively took a $14 million pay cut, giving the Sixers more than enough room under the $156,983,000 luxury tax apron to sign PJ Tucker using the non-taxable mid-level exception and Danuel House Jr. using the semi-annual exception.

Because the Sixers used the NTMLE on Tucker and the semi-annual exception on House, they are not allowed to cross the apron at any point between now and June 30. Had Harden picked up the player option for $47.4 million, the Sixers would have been limited to just the $6.5 million taxpayer mid-level exception instead. They also wouldn’t have the semi-annual exception, which teams only get when they’re under the apron.

It’s not an exaggeration to say that Harden’s contractual sacrifice was the centerpiece of the Sixers’ entire offseason strategy. In fact, some executives wondered if the Sixers already had a “handshake agreement in place on a future contract — which would violate collective bargaining rules,” Wojnarowski wrote in late July.

NBA finally stripped Sixers of their 2023 and 2024 second-round picks for illegal communications with Tucker and House ahead of free agency. The league’s investigation “found no wrongdoing” in Harden’s decision to opt out and re-sign for less, according to Shams Charania by The Athletic.

Harden’s contractual sacrifice apparently indicated he planned to stay in Philadelphia long-term. However, the Rockets now appear to be a legitimate threat to pry him away.

“Despite forcing his way out of the Rockets in January 2021, Harden has maintained something of a magnetic pull to Houston, drawn to the community, lifestyle and family there,” Wojnarowski wrote Sunday. “After what would be relatively short stops in Brooklyn and Philadelphia, a move back to a rebuilding Rockets franchise would effectively represent comfort and familiarity over an immediate championship chase.”

The 9-23 Rockets currently sit at the bottom of the Western Conference, but they have a promising young core headlined by 2021 No. 2 overall pick Jalen Green and 2022 No. 3 overall pick Jabari Smith Jr. They also have their own first-round pick this year, along with a first-rounder from the Milwaukee Bucks. The Brooklyn Nets also owe them completely unprotected first-round picks in both 2024 and 2026.

As of early December, the Rockets were projected to have a league-high $59.3 million in cap space this coming summer, according to Keith Smith of Spotrac. If the cap lands at $134 million (latest estimate), a max contract for Harden will start at $46.9 million. The Indiana Pacers ($49.8 million) and San Antonio Spurs ($47.1 million) are the only two other teams expected to have enough cap space for Harden’s full cap, while the Utah Jazz ($42.6 million) and Los Angeles Lakers ($33 .4 million) are the only teams with cap space that could possibly give Harden a chance at the playoffs right away.

All of this could end up being much ado about nothing if Harden and the Sixers go on a deep playoff run this season and the Sixers are willing to pony up a long-term deal this summer. If they flame out before the conference finals and don’t want to shell out nine figures for Harden, a Rockets reunion might be in order.

Unless otherwise stated, all statistics via NBA.com, PBPStats, Cleaning the glass or Basketball reference. All salary information via Spotrac or RealGM. All odds via FanDuel Sportsbook.