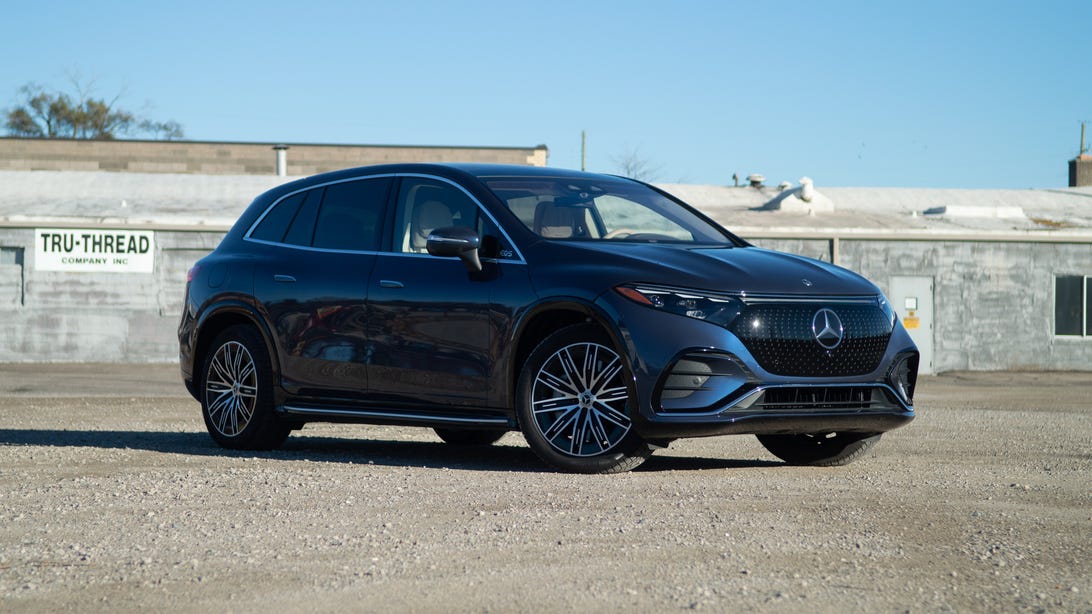 When it comes to electrification, Mercedes-Benz is ahead of other luxury car manufacturers. And nowhere is that more evident than in the EQS580 SUV, which is one of the quietest experiences I’ve had behind the wheel in many years.

I liked the EQS sedan’s spaceship-like design when it first debuted, and I think that look is just as good when adapted to an SUV. Sure, it’s not as aerodynamic as the sedan, but the EQS SUV’s shape is still mighty smooth with a drag coefficient of 0.26. The rear end of the roofline doesn’t taper too much, so the EQS retains a strong SUV shape. The hood has some curling, but the rest of the body is generally devoid of hard angles or other visual noise that would only get in the way of effectiveness.

Inside, the cockpit is almost a carbon copy of the EQS sedan – again, not a problem, because it’s great. It is not difficult to tell that a lot of thought was put into this interior. Build quality is excellent, with my tester’s $1,370 Nappa leather upgrade extending this plush feel to almost any surface. The triangle on the center console is my favorite part though, as it has three pointed metal stars built into it. Three rows of seats are available, but you can also opt for a two-row configuration, which offers plenty of rear legroom.

There is still a lot of practicality hiding behind this plushness. The door pockets are big enough for most water bottles, although big old Nalgenes will still have a hard time finding a place to rest. Under the center console’s sliding door is a set of pull-out cup holders and plenty of space for tchotchkes and the like. The storage tray under the console is huge, and there is also some extra space under the armrest. In the back, there’s about 31 cubic feet of cargo space, which is less than what the BMW iX offers, but it’s still enough for a family’s shopping bags.

The 580 is the most powerful model in the EQS SUV range and is likely to remain so, as Mercedes does not intend to launch an AMG variant for the time being. A pair of electric motors, one on each axle, produce 536 horsepower and 633 pound-feet of torque, which is enough power to propel this SUV to 60 mph in 4.5 seconds. The immediate nature of electric torque means acceleration hits like a sack of bricks at most speeds, pushing me back into the soft Nappa leather while the sound coming through the speakers provides a subtle but futuristic soundtrack.

Since the EQS SUV isn’t as aerodynamically efficient as its sedan sibling, there’s a bit more wind noise at speed, but the car still remains largely sealed off from the elements, helped in part by my tester’s $1,010 Acoustic Comfort package, which adds thicker glass. The SUV’s standard air suspension system soaks up just about every inch of nastiness on the road, and while it can stiffen up and hustle around, this car is best left in its softer settings. Standard rear-axle steering makes city traffic easy despite the EQS SUV’s larger footprint.

Regenerative braking is interesting here, just as it is on the EQS sedan. There are a few different strengths to go through, but there’s no true single-pedal mode – just Intelligent, which combines with the car’s myriad safety systems to keep a steady pace with low-speed traffic. The brake pedal also moves when the regeneration starts, to provide a predictable braking force every time my foot touches the pedal. Honestly, I like the way it works; it has never caught me off guard, although it feels strange after getting out of an electric car without this setup. The pedal is also a little mushy, which is fine for slow, steady stops, but it’s not as reassuring on heavier, more panic-filled applications.

The EQS SUV sacrifices some range for its larger, less efficient body. The EPA rates the EQS580 SUV at 285 miles per charge, or about 2.4 miles per kilowatt-hour. Downsizing to the EQS450 Plus SUV improves range to 305 miles, but nothing can match the outright efficiency of the sedan with its estimated range of 340 miles. Even so, the EQS SUV is still pretty good at sipping electrons, and my efforts behind the wheel produce numbers that meet (and occasionally beat) FB’s best efforts. When it’s time to juice up, the EQS SUV will accept up to 200 kilowatts of juice, going from a 10% state of charge to 80% in about half an hour.

I think the EQS SUV is best enjoyed at night, because the standard 64-color ambient lighting is a real sight to behold. LED strips stretch across almost every surface of the car, and there are unique animations to change the temperature or when the “Hello, Mercedes” voice assistant activates. There is also a setting to change the lighting when the vehicle accelerates.

Of course, there’s a lot more cabin technology in the EQS SUV than just some fancy lights. The 580 comes standard with Mercedes’ Hyperscreen, a piece of glass that stretches across the dash that houses a massive 17.7-inch central display, as well as a 12.3-inch digital gauge cluster and a 12.3-inch touchscreen for the passenger. The largest screen can display a giant map with overlays for the radio, massage seats and other functions. The navigation does an excellent job of ensuring a route includes plenty of chargers, and both wireless Apple CarPlay and Android Auto are included. USB-C ports are within easy reach of every seat, ensuring everyone’s devices stay topped up. The EQS SUV also comes standard with a full range of active and passive safety systems, including adaptive cruise control, lane assist, active steering assist, automatic emergency braking, automatic lane change and blind spot monitoring.

For that much money, expectations may be high, but the 2023 Mercedes-Benz EQS580 SUV exceeds them. It takes everything the automaker has learned about building a comfortable, interesting luxury SUV and adapts it to an electric future, and the resulting electric car feels as futuristic as it looks.

Why I’m still going to hold my PS5 vertically, despite the alleged risk